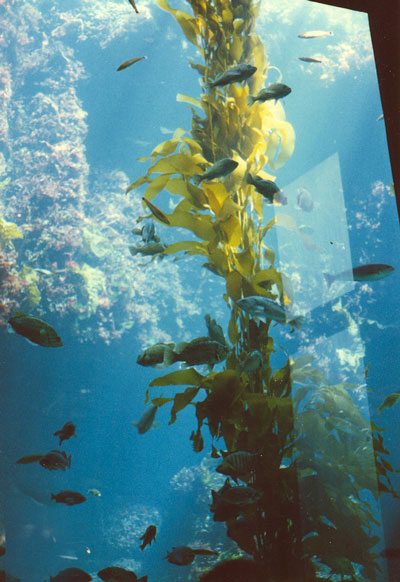 The first quilt, is an original design and there is no pattern available.  There are over two hundred fabrics in the top, collected over a period of time.  I have included a  couple of photos of the process of making this quilt, just so you can see that there were quite a few steps to achieve the final product.  The design was rendered on graph paper, with colored pencils, since it was designed way before computer quilt programs were available.

It was inspired by the three-story aquarium at Monterey Bay, California.  When you walk into the building the first thing you see is this enormous glass fronted aquarium.  The day we were there the sun was streaming in through the golden kelp, with schools of fish swimming through the streams of light.  It was a quilt in the making and a sight that I could not get out of my mind.  Bargello strip piecing was a technique with which I was familiar and felt that the undulating kelp would be best illustrated with this particular technique.  My Heart ‘n’ Diamond Bargello is an example of the type of piecing that was required to make the quilt top.

This very large vision, could not be contained in a small quilt, it had to be king-sized and so it is.  As I worked on the strips, I pinned them to a narrow area in my sewing room. As I finished the strips, I laid them out on the floor of our two story hall.  Then three units at a time could be viewed, from upstairs.  It wasn’t until the quilt top was finished, that I finally saw it as a whole, which was a very interesting experience.

My original intention was to applique fish on the quilt, but as the units lay on the hall floor, there seemed to be fish swimming through the kelp, suggested by the shading of the various print fabrics, so that idea was discarded.  The hand appliqued undulating strips on the border illustrate more kelp, twisting and surrounding the whole.  The center was machine quilted with hand quilting in the border. 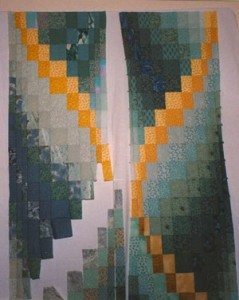 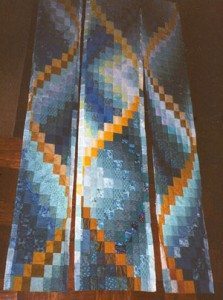 This quilt, like the Aquarium at Monterey, is a one of kind quilt and there is no pattern available, other than the Snow Crystals applique designs.

After viewing frozen Multnomah Falls on the Columbia River in Oregon and reading Bentley’s book on Snow Crystals, I had to make a quilt with these crystals.  You can get more information about him, at this website.  A fascinating look into the life of a man who took photographs of snowflakes, when photography was a relatively new invention.

At first I thought that I would make more of a scrap quilt, using many different aqua, green and turquoise fabrics, but then I found a yard of batik, that would be the perfect fabric.  It was the bolt end, but where would I find enough for a king size quilt?  This was before the internet and all its search possibilities.  We were going up to San Francisco to visit our daughter, so part of the trip was to stop at quilt shops.  On the way home I hit the jackpot.  I found a BOLT of the same fabric. Now I had enough.  Then after we came home a friend let me know that she had found five yards of it.  Now I had more than enough.  The snowflakes were cut from a fabric that is a white on white with a crystalline pattern printed on it.

Having just finished designing Lotus Blossom, I was still very enthusiastic about Feathered Stars.  If you compare the two quilts, you will notice the settings are very similar.  Snow Crystals was enlarged to king size instead of queen and the inner border was incorporated into the center.  It was a three year project.  It is machine pieced, hand appliqued and hand quilted.

What really was exciting is that after I entered it into the International Quilt Festival, that takes place in Houston TX every year, I was contacted by Quilter’s Newsletter Magazine.  They wanted me to send it to them to be photographed for the January 1999 cover.  Needless to say, I agreed.

If you would like to applique snowflakes, the patterns for the applique only, no piecing instructions, is available as Snow Crystals Applique. 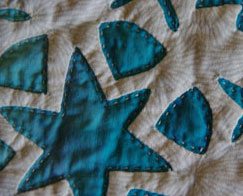 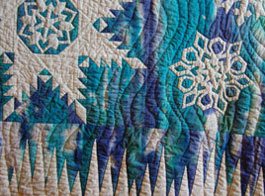 This quilt is actually my second completed quilt.  That means that there were lots of fits and starts, as well as discards along the way.

There were a couple of wonderful quilt teachers who taught year long classes, once a month.  We learned all about designing blocks and quilts, as well as putting them together by HAND.  No machine piecing or quilting.  All handwork.  It was a wonderful introduction to the basics of quilting.  The best way to learn was to dive in head first, so I took classes from both teachers, Sandi Fox and Judith Tasker Mount.

Christmas Celebration was developed during these four years of classes and really started with the center block.

We had taken a family vacation in the Sierra Nevada-Tahoe area of California, when I came across an antique quilt made with this block.  I had originally intended to make a whole quilt with this block, but each block has 96 pieces, instead I used it as the focal point of the quilt.  The corner blocks were designed in one of the classes.  Another class featured a ribbon bow block, but not as a corner, so I redrafted it and designed the twisted tail to go with it.  The folded ribbon border is an old pattern that you will see on many quilts, but it certainly changes the look by adding a bow and tail.  All of the blocks were designed with graph paper.

Drafting the wreaths was easy, because it is a feather wreath, but adapted to look like a Christmas wreath.

The quilting took a long time, because I kept changing how I was going to do it.  It was finally finished four years later.  Just in time for the Glendale (CA) Quilt Guild Show, where it took Best of Show.  It also was featured on the cover of Quilting Today magazine in 1987.

This quilt is available in my book Christmas Celebration! 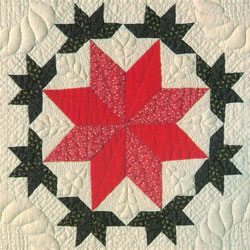 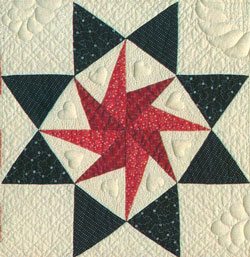 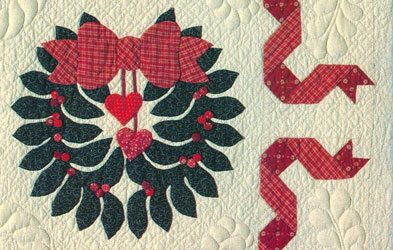