Home » Stay in Touch » About bdieges 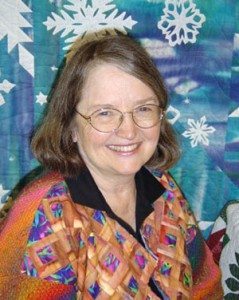 Even as a small child, Barbara loved playing and working with threads and fabrics.  Her grandmother and aunts always found ways to keep little hands busy with needlework.  She still cherishes her little Singer Featherweight, but now prefers her Bernina for most of her patchwork and machine quilting.

After graduating from college, Barbara taught kindergarten before starting her family.  While raising three children, she designed for Bucilla Yarn, developing her own line of stitchery kits.  As an active member of the Embroiderers Guild of America, she taught creative stitchery, cross-stitch, and needlepoint at local needlework shops and various parks and recreation centers.

Barbara made her first quilt in 1969, for the birth of her first daughter, but it was in 1982 that she became a dedicated quilter.  She has had several years of in-depth study of quilt history, design, and techniques with some very traditional and non-traditional quilt teachers.

As a member of two quilt guilds, she is involved in all phases of quilting.  She has designed three opportunity quilts for these two guilds.  Her quilts have won top awards at the annual Glendale Quilt Guild Show and have been exhibited nationally.

Since 1992, Barbara has had eight quilts juried into American Quilter’s Society Show in Paducah, KY, and four into the International Quilt Assn. in Houston, TX.  She has also has had numerous patterns and books published, as well as teaching quilt classes online at Quilt University.  Her book, A Thread Runs Through It, based on her one-woman play, has brought her great satisfaction.

Barbara is now retired from teaching/lecturing nationally, but still takes time to be involved with her local quilt guild and blogging on her website.  She designed several opportunity quilts for her guilds and is willing to share her craft with anyone at the drop of a pin.

In this picture, Barbara is wearing one of her qweaters, which is a quilt-sweater combination.  It has a knitted back and sleeves with a quilted front.

Until Today
After 30 years of traveling to teach and lecture I retired. Now I can present and share on my website Blocks of the Month, quilts, crafts, and projects, as well as keeping my Payhip store filled with my patterns.
Still teaching online at Academy of Quilting.

2010
*Featured Teacher and presented “A Thread Runs Through it”
at Cabin Fever Quilt Guild Retreat, Fairbanks, AK in September.
*Taught online at QuiltUniversity.com.

2007
*Devised a new method of piecing Half Square Triangles and Squares.
*Taught online at QuiltUniversity.com.

2006
*Featured Teacher and presented “A Thread Runs Through it”
at Lighthouse Quilt Show, Crescent City, CA in August.
*Traveled and taught at Colorado and Illinois quilt guilds.
*Taught online at QuiltUniversity.com.

2005
*Presented “A Thread Runs Through it” and taught workshops
at the North Carolina Quilt Symposium in May, as well as at the
*Georgia Quilt Council Conference in October.
*Entry accepted in the Hoffman Challenge.
*Won first place in Best of the Valley, Tulare, CA, for “View of the Lake.”
*Taught online at QuiltUniversity.com.

2004
*Presented “A Thread Runs Through It” and taught workshops
at Quilt Camp in the Pines retreat in Arizona
*Taught online at QuiltUniversity.com.

2003
*”A Thread Runs Through It”, her one-woman play was presented
at American Quilter’s Society Show in Paducah, KY.
*Taught three different workshops during the show.
*Taught online at QuiltUniversity.com.

2002
*A Thread Runs Through It
the book, published by the American Quilter’s Society.
*Taught online at QuiltUniversity.com.

1999
*Snow Crystals quilt on the cover of January-February Quilter’s Newsletter,
and in the International Quilt Association calendar.
*Developed her popular website.

1996
*Lotus Blossom quilt on the cover of Craftrends.

1990
*Christmas Celebration quilt on the cover of Quilting Today #22.