I had never been involved in an online challenge, although I have taken part in quilt guild challenges.  When I was first asked, considering where I live, this theme popped into my head immediately.  Below you can read the history of trains and Tehachapi.

Made this as a headboard for my grand nephew’s bed.

Between Tehachapi and Bakersfield via State Highway 58, there are a lot of trains, tunnels, and tracks winding through the hills.  Notice that the actual hills are not quite as bright green as the quilt.  I did a little wishful thinking and took some artistic license. 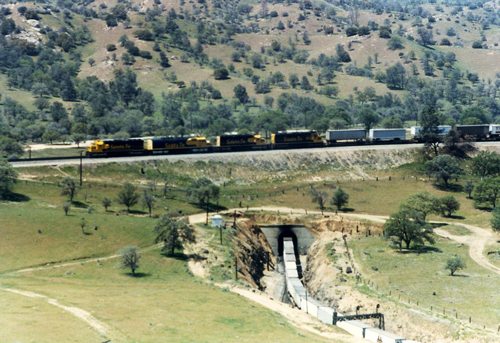 This is a photo of the historical Loop, which was built by hand between 1874-1876.  One of the engineering feats of its day, the Loop was built to ease the grade over the Tehachapi Pass.  The name is derived from the circuitous route it takes, in which the track passes over itself, a design that lessens the angle of the grade.  The train gained only 77 feet, but in the days of steam engines, every little bit helped, when it had to climb from 800 feet elevation to 4,000!

Construction began in 1874, and the line opened in 1876.  The quilt shows a passenger train, but today, only freight is allowed on these tracks.  On rare occasions, the Coast Starlight is rerouted through the Tehachapi Mountains due to problems on the coastal route.