I have been told, don’t know if it is really true, but the place where you sew isn’t a studio until it is a separate room from the house.  So I guess I have a studio.  It started out to be a bedroom and bath for my mother.  When it was time for her to move from her home to live with us, she asked to have separate living quarters, as she didn’t want to “live” with us.

So this was designed to be about 8 feet from the back door and under the same roof.   After it was well under way, she decided that she really did want to stay in the main house with us, so it became my studio; had been using a guest bedroom for sewing before.  Since we hadn’t installed the plumbing at this point, the bathroom became a large walk in closet.

My neighbor didn’t think that blank wall looked very inviting, so she painted the window scene for me.  She used a couple of my quilts as models.

Here is how I store my fabric. My concern is to keep it clean. I wonder how other quilters do that when they keep their fabrics on open shelves? These are “under the bed” boxes. My husband made the shelves, that have wheels, but on carpeting they don’t roll easily.

The fabrics, in theory are folded and “filed”, so you can see the edges of all the fabrics that are in the box.  When I get going on a project, I am not faithful to my method and I have to take the time to restore the fabrics.

A friend was moving and didn’t have a place for the ironer or mangle.  I had not used one before, but was hooked on it, once I got the hang of it.  It is great for pressing long pieces of fabric.

Gandalf is my quilting buddy, sometimes he lets me sit in my sewing chair, but my sewing machine cover pretty much indicates his attitude. 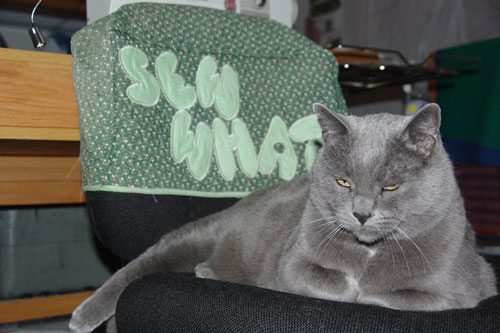 And why is he named Gandalf?  He is gray and happened to show up on our doorstep.  He would come and go, glad to get a handout, and then he would disappear.  Well, he finally decided that we would do, so he has been around ever since and that was about 12 years ago.  One of the sweetest cats we have ever met.